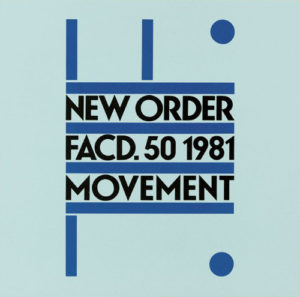 After the death by suicide of Joy Division’s singer Ian Curtis in May 1980, and the subsequent shock for those surrounding him, remaining members Bernard Sumner, Peter Hook and Stephen Morris elected to carry on, albeit under a new name — New Order. With the exception of two songs, “Ceremony” and “In a Lonely Place” (unrecorded in the studio but played live at the time of Curtis’s death), all the material played would be new.

A couple of songs on Movement stem from the initial songwriting session the band undertook in the summer of 1980. “Dreams Never End” and “Truth” were both played at the initial New Order concerts (still played as trio) in the US that September.[7] At this point it was still undecided as to who should be vocalist. The interim solution was that all three members took turns at singing before finally deciding that Bernard Sumner should take the main vocalist’s role with Peter Hook as back-up (though he sang lead on “Dreams Never End” and “Doubts Even Here”). The introduction in October 1980 of Gillian Gilbert, Stephen Morris’s girlfriend, lightened the burden on Sumner who had to play guitar and keyboards and sing (something he found impossible to do simultaneously) and enabled the band to pursue a more electronic approach. Subsequently, the remainder of the songs that appeared on Movement were written and then recorded over a seven month period “in two big bits, and a whole lot of little bits” (Sumner’s words),[8] as well as “Mesh”, “Cries and Whispers” (both early live staples and used as B-sides), “Procession” and “Everything’s Gone Green”, the latter forming a non-album single released as FAC53 in September 1981.

The producer of the album was once again Martin Hannett, who had worked with them as Joy Division; however, the rapport between producer and band had in the ensuing time eroded. Hannett was in a legal dispute with Factory Records and suffering from substance and alcohol abuse, and the band members—themselves still coming to terms with having to write and arrange songs without Curtis’s ear and lyric-writing ability—found him uncooperative. It would be the last time they worked together.

Movement is the debut album by New Order, released in November 1981 on Factory Records.