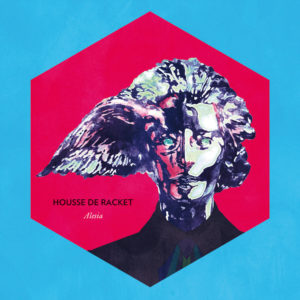 After a successful first record which included the hit single “Oh Yeah!”, acclaimed by music press and tastemakers, Pierre Leroux and Victor Le Masne aka Housse de Racket toured Europe in front of a growing fan base, developping a catchy live set.

For their new record, released on August 22nd, they worked with French superstar producer Philippe Zdar (Cassius, Phoenix, The Rapture…) on eleven futuristic pop songs, with a wide range of influences from Morricone to Carpenter, from Sparks to Bowie, walking in the steps of their elders Air and Phoenix. Alesia can be seen as an interior, pop and epic journey, drawing influences from peplum to arthouse films, from the 80s thriller to sci-fi or comedy of manners. But Victor and Pierre are modern young guys who have digested New Wave and French Touch and take a careful look at the world in which they live.

No surprise that Alesia was released on Kitsuné, a label with a strong international focus which can share the borderless vision and ambitions of the band.